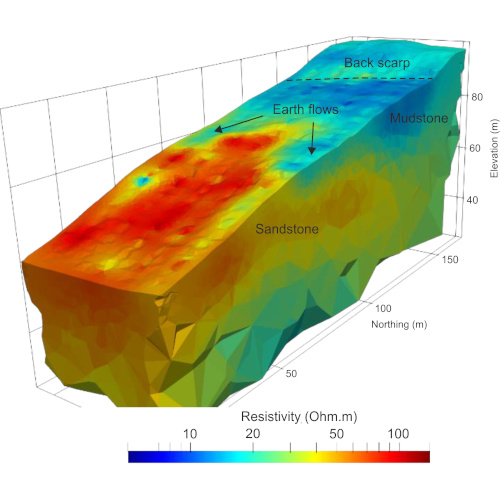 Considerable research efforts are going into developing geophysical imaging technologies to monitor subsurface precursors to landslide events. They offer the potential to ‘see-inside’ unstable slopes to identify the processes leading to slope failure. But as parts of the landslide move, the geophysical sensors move with them. This causes errors in the data, obscuring the changes occurring in the ground and reducing the efficacy and value of the approach. Researchers in medical imaging have encountered similar problems, as their sensors move when a patient breathes for example. They have developed methods of determining the sensor positions only using the sensor data. Our hypothesis is that, using similar techniques with optimally chosen measurement schemes and deep learning approaches, we can determine the movement of the sensors and changes in the ground separately and simultaneously, increasing the reliability of geophysical monitoring of landslides.

The specific aims of this project are to systematically investigate measurement protocols that improve the resolution, reliability and separability of the measured signals and to test their application to landslide monitoring using a combination of numerical modelling, improvements to imaging algorithms, and experiments in the laboratory and at field observatories.

Applicants should have strong numerical abilities and hold a minimum of a UK Honours Degree at 2:1 level or equivalent in subjects such as Earth Science, Physics, Mathematics, Engineering, Environmental Science, Natural Sciences.