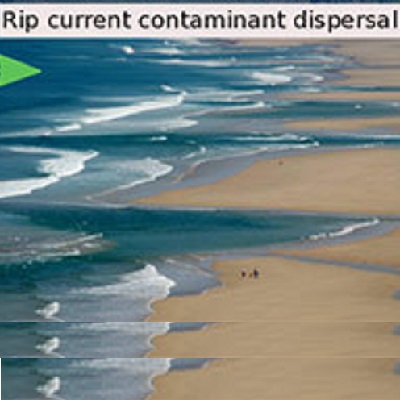 Scientific background: Rip currents interact with density-driven freshwater plumes along the coast to mix and disperse contaminants from fluvial discharge into the shelf-sea where they impact the environment. The ability to predict the transport of these contaminants would greatly assist in the compliance and regulation of water quality directives along the coast. Tighter coupling between rip current dynamics and density-driven plumes is needed to make such predictions, and will be addressed via this PhD project.

Aim: Evaluate and predict the transport and dispersion of contaminants by the interaction of rip currents and plumes. Plumes are strongly controlled by winds, frequently becoming constrained to the coast and travelling alongshore where they interact with rips, which disperse materials seawards of the surf-zone. Recent observations challenge the traditional view that rips are simply seaward-flowing jets “exiting” the surf-zone, showing instead that they frequently “rotate” within the surf-zone and thus maintain material concentrations.

What will you do? 1: Quantify how density-driven plumes deliver freshwater contaminants to the coastal zone, where they are mixed and dispersed via interaction with rip currents. -> Acquiring skills in field data collection, hydrodynamic modelling and its programming language, and in complex data analysis. 2: Validate a calibrated coupled plume–rip model to better quantify and predict the dispersion of contaminants in the coastal environment. -> Acquiring skills in model application and biogeochemical cycles. 3: Work with regulatory bodies to ensure that project findings are used to manage coastal water quality and quantify risk. -> Acquiring skills in collaborating with industry organisations and generating scientific impact.

What will you receive? You will receive support and training from experts in marine sciences at Bangor University, National Oceanography Centre (NOC) and Deltares. You will undertake internships at NOC and Natural Resources Wales, and will receive specialist training in hydrodynamic modelling from Deltares.

Applicants should hold a minimum of a UK Honours Degree or equivalent at 2:1 level in subjects such as Oceanography, Physics, or a relevant science or engineering subject; a Masters-level degree would be highly beneficial. Numerical competence should be demonstrated by holding a mathematics A-level or equivalent, and a demonstrable ability to use computers for scientific analysis would be advantageous.

Applicants should address any enquires to Dr. Martin Austin at the School of Ocean Sciences, Bangor University (m.austin@bangor.ac.uk).