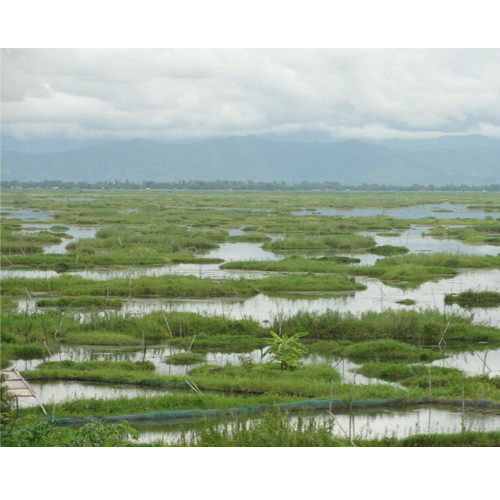 Loktak Lake, located in Manipur, is the largest freshwater lake in NE India, declared a Ramsar site in 1990. It is divided into three main basins which have different land use practices by local populations, with the southern being in the Keibul Lamjao National Park. This National Park is also the last natural habitat of the Manipur Brow deer (Rucervus eldii eldii). In recent decades this pristine environment has been placed under increasing pressures from aquaculture expansion, land use alteration and deforestation, rapidly increasing pesticide use, upstream pollution from conurbations, and climate change. This has resulted in drastic water quality deterioration and water level fluctuations (further complicated by the construction of the Ithai dam in 1993 which has prompted increased sediment retention). While toxic bioaccumulation due to pervasive pesticide use has impacted the natural food web structure prompting serious concerns to human health.

Via the collection and dating (210Pb, 137Cs) of lake sediment cores (n=3) from three different land use regions of Loktak Lake this project will quantify changes in sedimentary organic content, aquatic ecology and pesticide accumulation rates since the initiation of human impacts upon the lake. The concentration and identification of pesticides will be established over time, along with the concentrations of algal pigments and stable isotopes (δ13C, δ15N, C/N ratios) to determine the impact of aquaculture, pesticide use and climate change upon the lake.

The aims of this project are to:

The student will work between the National Environmental Isotope Facility at the British Geological Survey and the School of Geography at the University of Nottingham, being embedded within a team of isotope geoscientists and palaeolimnologists.

This project is in receipt of additional funding from the BGS University Funding Initiative.

Applicants must have a minimum of a 2:1 class degree in geography, geology or environmental sciences or a masters degree in a relevant field.