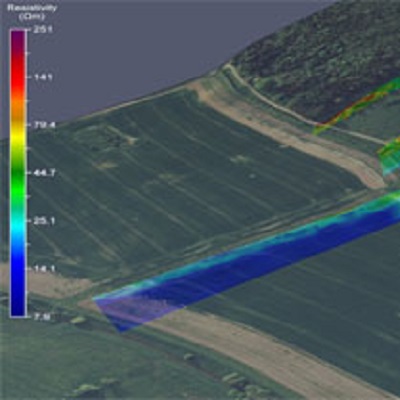 The spatial and temporal dynamics of soil moisture content can have a critical effect on slope stability in landslides and engineered earthworks. But measurement of soil moisture over large areas is not achievable using conventional soil physics techniques. Electrical Resistivity Tomography (ERT) is the most widely applied geophysical technique used to investigate landslides. Due to the strong dependence of resistivity on saturation, fracturing, clay content and weathering, it is often used to image failure surfaces. But by repeating ERT surveys over time, it is possible to produce volumetric images of changes in resistivity caused by variations in moisture content. Recently several research groups have begun monitoring landslide and earthwork bodies continuously using automated resistivity tomography systems with permanently installed electrode networks. By providing proxy information on subsurface hydrogeological changes with high spatial and temporal resolution, these systems aim to reveal the hydraulic precursors to landslide movement.

Although the data measured by such systems have been shown to respond to changes in moisture content, producing accurate time-lapse sequences of ERT images is currently hampered by the lack of imaging algorithms that can incorporate changes geometry and topography due to subsidence and deformation. This project will primarily be theoretically and computationally based, with some opportunities to participate in the field data gathering if desired. It will develop the algorithms to enable, for the first time, time-lapse imaging of ERT-derived moisture content changes in geometrically dynamic environments. It will also seek to quantify the uncertainties in the moisture content caused by the finite resolution of the time-lapse ERT inversion process and uncertainties in the petrophysical relationships between resistivity and saturation.

The PhD will be hosted by the British Geological Survey and awarded by the University of Lancaster. The student will be jointly supervised by Dr Paul Wilkinson (BGS) and Professor Andrew Binley (Lancaster), and will have the opportunity and support to spend time working at both institutions.

Applicants should hold a minimum of a UK Honours Degree at 2:1 level or equivalent in subjects such as Environmental Science, Earth Science, Physics, Mathematics, Engineering, Natural Sciences. No prior experience of geophysics is necessary but it will be advantageous.