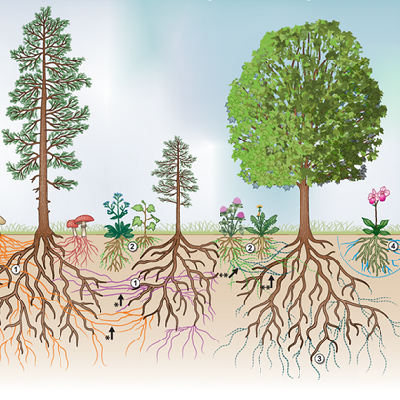 What are Common Mycorrhizal Networks?

Almost all plants have symbiotic mycorrhizal relationships with fungi, which are beneficial to both the plant and the fungi. The word mycorrhizae, derived from Greek that means fungus-root, describes how the fungi colonises the roots of plants. Plants transfer carbon they fix from the atmosphere during photosynthesis to the symbiotic fungi, in exchange for nutrients and water. The fungal hyphae also add to belowground carbon storage by exuding carbon-containing compounds into the soil. In return, the fungi has access to a far larger pool of other nutrients, such as nitrogen, due to the vast surface area of hyphal mycelium, which far exceeds the surface area and therefore nutrient availability of the trees roots. By trading these resources, both organisms benefit and this increases their chances of surviving. A common mycorrhizal network (CMN) describes a situation when the fungal network links plants together belowground. These networks, which plants use for communicating the presence of pests and diseases and to release chemicals that provide plants with a competitive advantage over other non-mycorrhizal plants and referred to often as the Wood Wide Web (Figure 1).

Why are they important?

Forest ecosystems represent one of the greatest stores of terrestrial carbon on the planet. Within this, Common Mycorrhizal Networks play an important role in regulating the storage and release of this carbon. Understanding the mechanics of these processes can help us to better understand biogeochemical pathways, enable us to manage forests to promote greater carbon storage and understand how forest ecosystems will respond to a changing climate. In addition, the CMNs mediate overstorey-understorey competition and competition amongst and between forest tree species.  Underground signals carried through common mycelial networks can also warn neighbouring plants of imminent attack from pest and diseases as well as unfavourable condition such as drought and as such are essential members of forest ecosystem communities.

Why is it important to have this knowledge?

Climate change is probably the most significant problem faced by humanity in the 21st century. Atmospheric carbon dioxide has increased by 31% since the Industrial revolution rising from 280 ppm in 1900 to 400 ppm at the present day. Soil is the largest terrestrial pool of carbon dioxide although we know very little about the complex belowground carbon cycle. We know that plants fix atmospheric carbon dioxide in the soil and exchange this resource with mycorrhizal fungal symbionts. Mycorrhizal fungi are a significant component of soil microbial biomass and therefore carbon storage within soil. Small changes in soil carbon storage could therefore have a large effect on atmospheric carbon concentrations. Specifically my study will be investigating temperate forest soils and temperate forests globally are currently the only forest biome, which is increasing in size annually. If we can understand how best to plant and manage forests to increase the belowground carbon storage then we may mitigate some of the increases in atmospheric carbon dioxide. Results from this investigation will start to quantify the differences in belowground carbon transfer of trees in monoculture and mixed species forests. 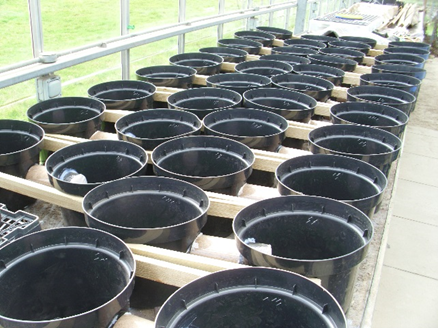 We will refer to the three tree species subsequently, as follows:

We grew four trees of the three different species, in sieved soil collected from forestry plots, under mature trees of the same species, in the knowledge that the soil will then contain the correct mycorrhizal fungi spores. We placed the soil in pots connected by Perspex tubes of 2 mm thickness (Figure 3) and covered the ends of the tube in 40 µm nylon screen to prevent root ingress. We planted the trees and mini-rhizon® suction sampling devices in the pots in the following combinations:

This enabled us to measure differences in the carbon transferred between trees of the same species when compared to those of differing species. We filled each interconnecting pipe with 2 kg of sand and 20g of bone meal, each pot will also contain roots, hyphae (Figure 3), will only contain hyphae as the 40 µm screen excludes roots. One tree will uptake a carbon isotope and then the rate of transfer, as well as quantity transferred measured after destructive harvesting by oxidising the sample and then using a scintillation counter to determine isotopic activity of each plant compartment. 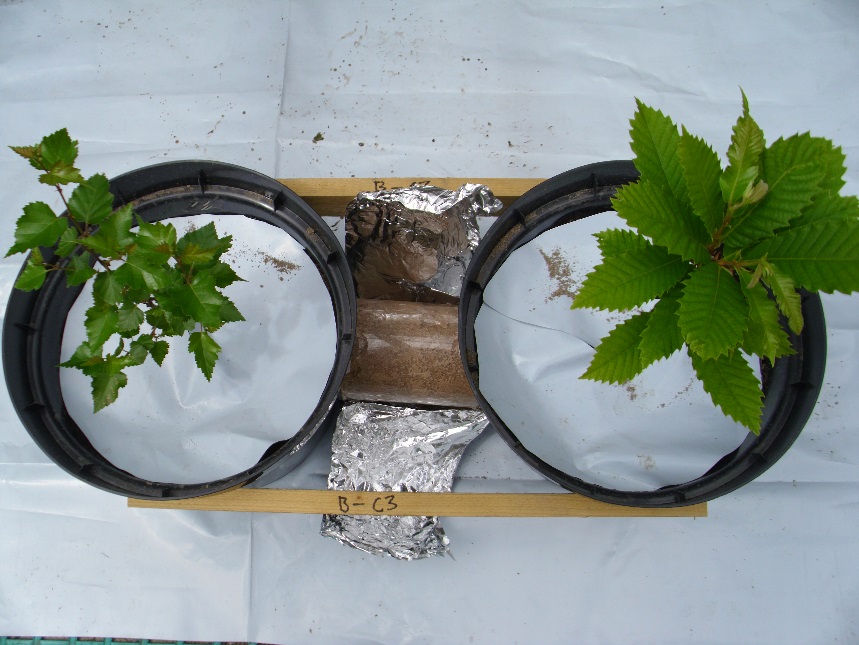 Figure 3: The trees in the joined pots B (Betula pendula) on the left and C (Castanea sativa) on the right 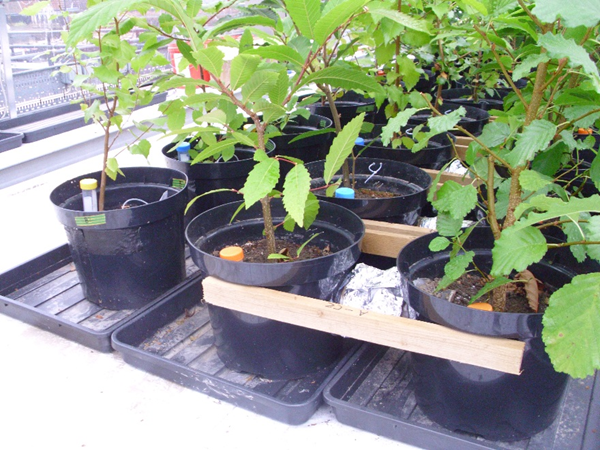 Figure 4: The radioactivity of the following were measured in both pots and the adjoining pot (New leaves, Old leaves, Branches and stem, Soil water, Soil, Roots, Soil respiration, Sand).

I now have the data analysis to perform .This will mean separately grinding and homogenising all the samples to allow a representative sub-sample to be burnt and then the radioactive content counted.

The experiment and one of my supervisors Prof. Davey L. Jones made an appearance on the BBC Gardeners’ World Facebook page.

Many thanks to my supervisors Prof Davey Jones and Dr Andy Smith, the technical staff at Bangor University and to all the team at Envision, for their assistance with this project.