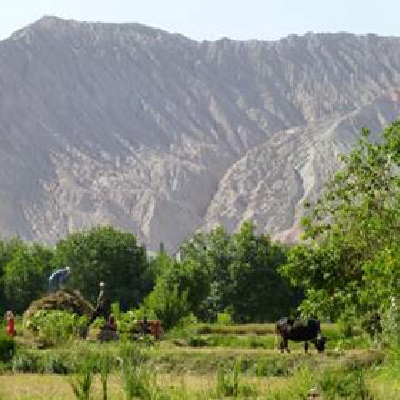 Researching crustal deformation processes and the degree of their proposed coupling with climate is the focus of this research, using the type example of India-Asia collision and Himalayan-Tibet evolution.

The timing and mechanism of Tibetan plateau uplift and associated regional climate change is much debated and poorly constrained. This project will use the Cenozoic sedimentary record of material eroded from the Tibetan plateau and deposited in the adjacent Tarim basin to assess the timing of evolution of the northern margin of the Tibet plateau, and document the record of regional climate change.

The project, which will involve full training in each aspect, will involve: Sedimentological field work in the Tarim Basin including facies analysis and sedimentary logging. A detrital geochronological, thermochronological and isotopic provenance study, involving radiogenic isotope analyses at NERC’s Isotope Geoscience Lab at BGS Keyworth (NIGL), in order to constrain the plateau’s geological evolution from the detrital record of material eroded from it.

A stable isotope study, involving analyses at LEC’s stable isotope lab, to assess regional climate variability from a study of the pedogenic carbonate and organic carbon preserved in the sedimentary record.

This project involves significant periods away from Lancaster for field work, and analyses at the labs at NIGL. The project would appeal to students who are comfortable leading field-assisted field work in isolated terrain in a different culture, and who would enjoy the rigours of detailed laboratory work. It would suit a student interested in going in to the fields of sedimentology, tectonics as determined by geo/thermochronology, or palaeo-climate studies.

Applicants should have a minimum of a UK Honours degree at 2.1 or equivalent, in geology / earth science.