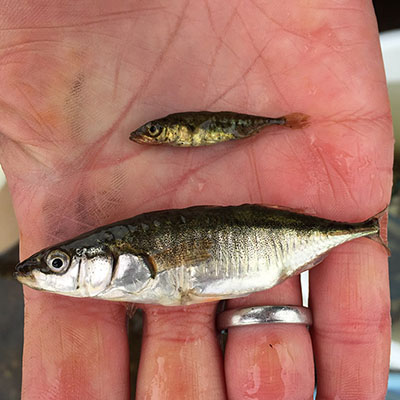 Many of the lochs of North Uist, Scotland, contain newly evolved species-pairs of three-spined stickleback: anadromous (large, salt water tolerant), heavily armoured fish living alongside smaller, freshwater relatives. Due to changing sea-level, low-lying coastal lagoons often experience periods of isolation from and re-connection with the sea. This project aims to determine if past changes in marine connectivity of the lochs can explain the patterns of speciation in sticklebacks, whilst highlighting the impacts that future changes in sea-level will have on the evolution and diversity of species on coastlines. Furthering understanding of the processes that drive and impede speciation are important both in terms of the conservation of current species and in developing new species for the food production industry.

Current levels of reproductive isolation will be tested by trapping sticklebacks to identify distribution, genotyping the fish for the ‘Eda’ gene for evidence of the prevalence of hybrids and performing ‘crossing experiments’ by mating between 6 families of lab specimens to determine strength of assortative mating. Species-level phylogenetic trees will be built using data from ~20 lochs and used to estimate divergence times. Finally, past marine flooding will be reconstructed using diatom and water chemistry samples and loch sediment cores to analyse past diatom species and lithology, which will also be radiocarbon dated to determine the timescale of each core. The North Uist bedrock height will be mapped using dGPS overlaid with OS data to predict which lochs would be flooded at certain sea levels.

“I have been interested in the stickleback populations on North Uist for some time and was fortunate enough to get the opportunity to study their dietary adaptations during my Masters degree. The species pairs on the Island are unique and understanding the conditions under which they have evolved will be both extremely interesting and extremely useful.”