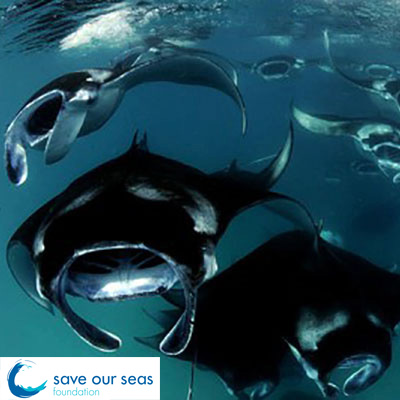 Manta and Mobula rays are species under threat from both targeted and bycatch fisheries supplying the recent increase in demand for gill rakers for use as a pseudo-remedy in some Traditional Chinese Medicines. Such exploitation will likely be met by distastrous declines exacerbated by their long time to sexual maturity, infrequent reproduction and low fecundity. As a result of such trade, the genus Manta has been listed on the Convention on International Trade in Endangered Species (CITES) which regulates the trade in threatened species internationally. Yet morphological similarities and taxonomic uncertainties make identification of mobulid rays and their traded parts challenging. This project sets out to provide a genetic means of identification to aid in the enforcement of CITES in their protection, and to advance understanding of population structure, demographic history, speciation and adaptation in Manta rays in order to effectively inform conservation policy.

The project will use advances in next-generation sequencing techniques to describe population structure and demographic history of Manta rays throughout their entire range, and investigate the extent of local adaptation in populations in order to generate recommendations for prioritising populations for conservation. Furthermore, it will investigate the processes leading to differentiation between the recently diverged Manta species. Finally, in order to address the exploitation of rays for their gill rakers, the current project works towards developing a Global mobulid Genetic ID kit which can be used by scientists and enforcement authorities alike to identify a specimen to species and regional level. These objectives will be achieved using double digest Restriction Site Associated DNA sequencing (ddRAD) techniques to identify Single Nucleotide Polymorphisms (SNPs) of interest.

“I believe that, whilst population numbers are important in conservation, understanding and extent of genetic diversity sets management up to succeed”