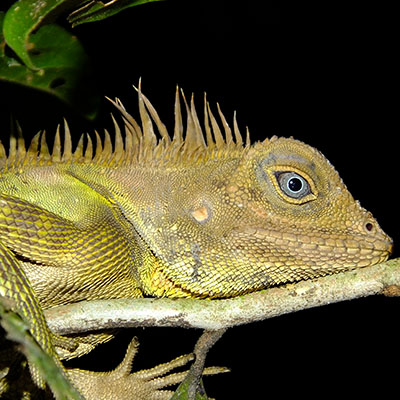 Climate change is having an ongoing effect on ectotherm (cold-blooded) ecology but habitat conversion to plantation in SE Asia has a faster thermal impact on their immediate environment. Lizards’ morphological traits are known to be capable of evolving within decades and so the project hopes to capture a snapshot of this ‘evolution in action’ in response to these thermal pressures and will investigate why some species thrive in human-engineered landscapes while others fail entirely. Overall the main aims are to see how animals adapt to various levels of habitat disturbance and to observe the resultant species diversity across the habitats.

The thermal and morphological traits of Malaysian agamid or “Dragon” lizards from Gerik in Perak State will be measured and compared across populations in differing habitats such as palm and rubber plantations, or primary and secondary forest. The thermal capabilities, such as their speed and subsequent temperature, will be measured using a variety of standard techniques, including analysing them on the move on a constructed track, before returning the lizards to where they were caught. Models of lizards will also be deployed in various habitats, containing temperature loggers to measure the temperatures an animal may be subjected to in its environment.

“I’ve been fascinated by animals since an early age, especially reptiles and so the link to this project is obvious. Having now visited Malaysia it is a valuable opportunity to study the animals that have managed to adapt to these novel environments and how they have managed to do this.”