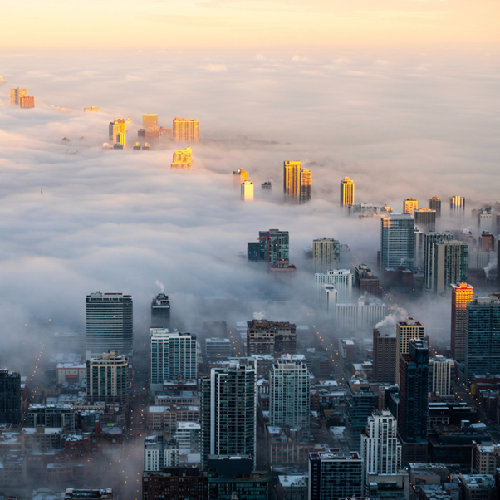 Halogen (i.e. chlorine, bromine & iodine) gases are ubiquitous in Earth’s atmosphere and since the 1970s are recognised as the principal driver of stratospheric ozone layer depletion. While the impact of halogens in the stratosphere is well understood, it is now increasingly recognised that halogens play a far wider role and may have profound, but overlooked, impacts on the chemical composition of the troposphere – the lowest region of Earth’s atmosphere[1,2]. At the forefront, halogens alter the troposphere’s oxidising power (or “self-cleansing” capacity) and therefore its ability rid itself of pollutants[3-5]. From a climate perspective, this has important implications as halogens may (i) alter the time greenhouse gases (e.g. methane) remain in the atmosphere, thereby influencing their warming potential, and (ii) modify the production of aerosol (microscopic particles suspended in the atmosphere) which effect clouds and cool the climate. Tropospheric halogens thus possess leverage to influence climate indirectly, though these effects are poorly constrained as most climate models have yet to consider them.

Working with scientists at the Met Office and University of Leeds, the student will develop and apply a state of-the-art Earth System Model to quantify the impacts of halogens on the composition of Earth’s troposphere.

As understanding of tropospheric halogens is poor (e.g. little is known of how natural halogen sources have changed over time) there is strong potential for high impact research in this rapidly evolving field.

The project will tackle the following key research questions:
• What is the tropospheric abundance/distribution of reactive halogens and how has this changed during
the Anthropocene? What are their key natural/anthropogenic sources?
• How do halogens affect the troposphere’s regional/global oxidising power and what are the implications for climate-relevant gases (e.g. methane, volatile organic compounds, tropospheric ozone) and aerosol?
• Do tropospheric halogens affect estimates of pre-industrial to present-day and future climate radiative forcing?

We are looking for a self-motivated candidate with an interest in climate science and/or atmospheric chemistry.

Applicants should hold a minimum UK Honours degree at 2:1 level (or equivalent) in Chemistry, Physics, Mathematics, Natural or Environmental Science, or a related discipline. As the project involves the use of atmospheric models and large observational datasets, it is well suited towards numerate candidates with an interest in scientific computing. We don’t expect you to have these skills on day one (although that would be an advantage), but you will have to demonstrate to us that you will be able to learn and develop them yourself.