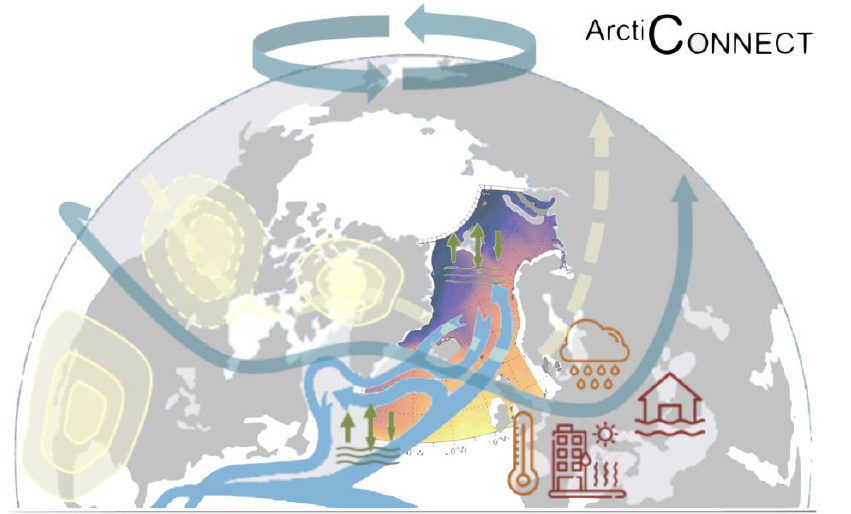 Extreme weather such as floods, heat waves, unusually cold harsh winters are increasingly prevalent across the Northern Hemisphere. For instance, the Thames barrier, designed to prevent flooding of the London floodplain from a combination of high tides and storm surges has been raised 199 times since 1982, well in excess of the originally anticipated 1-2 times yearly. The occurrence of extreme weather has been linked to instabilities in the mid-latitude atmospheric jet stream and low sea-ice concentrations in the Arctic Barents and Kara Seas. Observations and ocean circulation models also show that the oceanic heat transportfrom the northern North Atlantic Ocean into the Barents Sea is a controlling factor on the sea ice extent here. It is likely then, that the warm currents that melt Barents and Kara sea ice lose heat on their journey north, and also lose heat to the atmosphere above have a role to play in the destabilization of the atmosphere jet stream and extreme weather. This project will seek to quantify the heat loss from the North Atlantic Current as it wends its way north through the Greenland, Irminger and Norwegian Sea, identify ocean-atmosphere heat exchange hotspots and evaluate their impact on both Barents and Kara sea ice and the atmospheric jet stream. The analysis will be conducted using existing hydrological and reanalysis datasets, as well as output from numerical coupled ocean-ice models, and climate model experiments.

The proposed research complements the aims of the multidisciplinary ArctiCONNECT project that draws together atmospheric, meteorologic, climate and oceanographic experts from Exeter, Reading, Oxford, Southampton, Bangor, the National Oceanography Centre and the UK Met Office. The student will benefit from engaging with the wider ArctiCONNECT network while collaborating closely with Bangor ArctiCONNECT scientists and their co-supervisors, James Screen (Exeter) and Camille Lique (IFREMER, France).