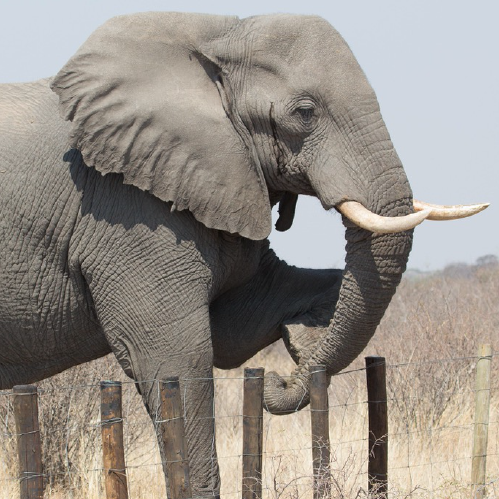 The continental-range of the African elephant has been dramatically reduced and fragmented due to the rapid expansion of human settlements and agriculture, resulting in escalating conflict over access to food and water resources. This is particularly apparent in regions that border national parks with high elephant densities and where neighbouring rural communities rely heavily on subsistence farming. Indeed, human elephant conflict (HEC) is considered a major threat to biodiversity conservation and human well-being, which is further exacerbated by climate change. Although HEC has been the focus of previous research, the ecological and social components of the problem are rarely studied together, which can impair our ability to understand the key factors driving conflict. However, the recent development of social-ecological system science has provided an interdisciplinary framework for analysing data from both disciplines that has proved very effective in addressing conservation-based challenges.

This project will explore the ecological and social drivers of HEC on the western border of the Makgadikgadi Pans National Park (MPNP), Botswana. The student will gain first hand experience designing and undertaking cutting-edge ecological and social research in a region of considerable conservation importance. Motion-activated cameras will be used to determine how elephant activity and behaviour is influenced by habitat, surface water and proximity to settlements/agriculture. These data will be supplemented with 10- years of elephant distribution records across MPNP, as well as historical data on HEC across the region. Community surveys will be conducted to determine human behavioural patterns, agricultural activity and the perception of living with elephants. These multiple data streams will be integrated to develop an individual[1]based model for predicting how HEC will be affected by mitigation approaches, as well as changing land-use and climate. This promises to be an exciting project that would suit an ambitious biologist who is keen to conduct applied conservation research.