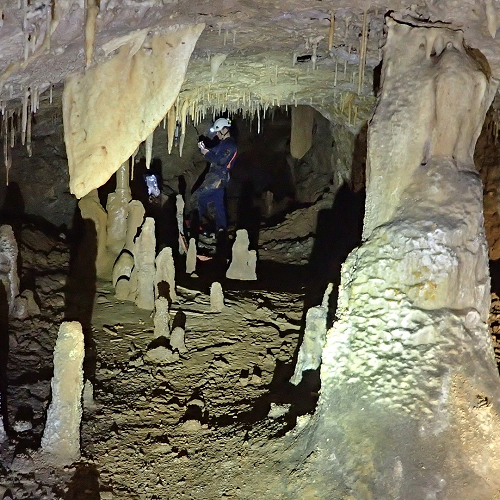 The world’s population relies on using nitrogen to boost crop yields and ensure sufficient food production. However, application of nitrogen fertilizer in excess of that taken up by plants and animals causes contamination of soils, surface waters and groundwater reserves. This has major implications for environmental and human health, causing eutrophication of surface water bodies and toxicity to drinking water supplies. These environmental and health concerns are of global significance for karstic landscapes (carbonate bedrock) where a dual permeability enables nitrogen to be transferred rapidly into the groundwater and then retained for extensive periods of time (decades). This creates a legacy of nitrogen contamination for future generations, directly affecting over a quarter of the World’s population which are dependent upon karst groundwater for consumption. Scientists require a tool to facilitate measurement of groundwater nitrogen contamination in karst terrain and prediction of contamination levels into the future to help determine the longterm safety of drinking water supplies. Here, we propose to use cave stalagmites as a time-constrained record of nitrogen contamination in the karst vadose zone. Stalagmites from selected cave sites in N. Spain and the UK, beneath pastoral and arable ecosystems respectively, will be used to generate time-series’ of nitrogen pollution dynamics throughout the industrial era and establish a baseline from which to contextualise current pollution levels. The generated datasets will then be used to validate predictive models of nitrogen dynamics in karst. This PhD project should appeal to applicants with an interest in biogeochemistry and groundwater hydrology, requiring skills in field and laboratory chemical analysis, as well as numerical modelling. The project will offer a comprehensive training program to enable successful applicants to develop these skill sets to the level required for successful completion of the PhD program.

Applicants should have a minimum of a UK Honours degree at 2.1 or equivalent, in geology / earth science / environmental science / physical Geography.