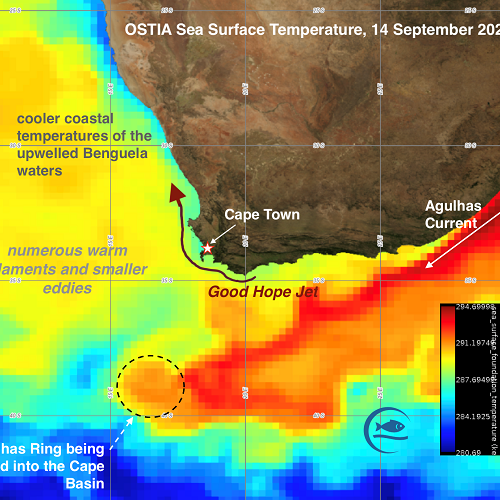 The Benguela upwelling system supports fisheries that are key marine resources of the developing nations of South Africa and Namibia.  Benguela fisheries yield has experienced large fluctuations over the last few decades as a result of fishing and ocean dynamics.  In particular, recent results from satellite data and ocean models suggest that the vigorous eddy activity of the Cape Basin has increased with anthropogenic global warming, most likely as a result of increased leakage from the Agulhas Current that overshoots Cape of Good Hope.  The Agulhas leakage takes the form of spectacular massive Agulhas rings that can be seen from space, smaller filaments and the Good Hope jet that flows around the Cape.  Increased Cape Basin eddy activity also has the potential to export more nutrient-rich water of the productive Benguela upwelling system away from the West African continental slope, impacting marine ecosystems here.  At the same time, Agulhas leakage is important for global climate because it is a key source of heat and salt for the Atlantic and its meridional overturning circulation, which in turn is fundamental to the functioning of earth’s climate system.  This interdisciplinary project will estimate how eddies, filaments and rings contribute to  Agulhas leakage by mixing Indian Ocean waters across, and redistribute upwelled Benguela Current water throughout the Cape Basin, and examine the impact on key fished and non-fished species of the Benguela upwelling system. These statistical analyses will resolve interannual variability and any trends over the last 40 years of the satellite era, and will use data from satellites, gridded hydrography and float data, and regional catch data.

Applicants should hold the equivalent of a minimum of a UK Honours Degree at 2:1 level or equivalent in numerate subjects such as Marine Biology and Oceanography, Environmental Science, Geography or Natural Sciences.  Or alternatively an MSc in Ocean Sciences, Meteorology, Applied Physics, Applied Mathematics or other relevant subject.   We welcome applicants of all nationalities.  Applicants from under-represented groups in ocean sciences are encouraged to apply.