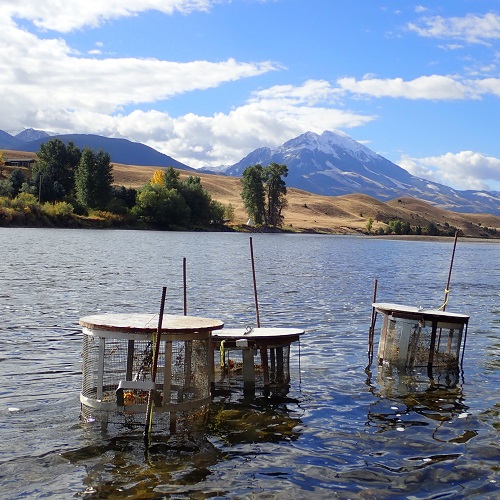 Climate change may drive the emergence of disease epidemics with severe ecological and economic consequences. Freshwater ecosystems, and their iconic inhabitants such as salmonid fish, are among the most threatened by anthropogenic change – disease emergence further endangers their biodiversity. To improve the resilience of salmonid populations to future disease threats, this project aims to understand how host-parasite coevolution is linked with the emergence of the Proliferative Kidney Disease (PKD) in salmonid populations in Europe and in North America. PKD has been linked with declining trout populations in many European countries and in 2016 a PKD outbreak in the Yellowstone River in Montana, USA, killed 1000s of the native mountain whitefish. PKD is caused by a microscopic parasite Tetracapsuloides bryosalmonae, which is a highly unusual cnidarian that possesses polar capsules similar to the stinging cells of jellyfish. The recent reference genome of T. bryosalmonae shows that it is one of the smallest sequenced metazoan genomes and highly divergent from other species. Capitalising on the new genome-scale data, this project will provide the first insights into the evolution of this important disease agent across its broad Holarctic distribution. Patterns of host-specific adaptation will be investigated by sampling a broad range of fish hosts. By focusing on whitefish samples from the Yellowstone, genome-wide association studies will be conducted to reveal putative candidate virulence genes. The project will add to an existing biobank of parasite isolates and involve the use and development of an innovative de-novo genotyping-by-sequencing approach, relying on transposable element flanking regions, with custom metabarcoding. Training will be provided in molecular biology and bioinformatic analyses, using unix, high performance computing and perl/python programming. There will be opportunities to collect samples from the Yellowstone River, and extensive collaborations with European network of project partners.

Applicants should hold a minimum of a UK Honours Degree at 2:1 level or equivalent in subjects such as Environmental or Natural Sciences. Applicants with first class degrees and/or high-quality Masters qualifications and interests in host-parasite coevolution and adaptation genomics are especially encouraged to apply.