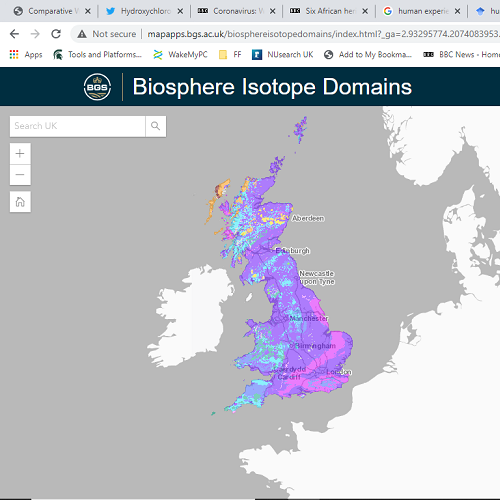 This PhD will create a novel methodology for GIS mapping of the extent of Pb pollution through time in Central Britain, resulting in an important addition to the BGS Isotope Biosphere Domain Map. The research will have implications for environmental scientists working in modern and legacy pollutants, veterinary scientists, geographers and archaeologists. The methodology, once established, would be applicable to other regions.

Central Britain is dominated by the Pennine Hills and includes areas of outstanding natural beauty, such as the Peak District National Park, known internationally for its ‘pristine’ landscapes and conservation areas. However, in the past, the area was better known for industry as intensive lead (Pb) mining and smelting took place from the Roman Period onwards.  As Pb is a naturally occurring toxin, it is likely one of the earliest anthropogenic environmental contaminants and widespread use has resulted in global environmental contamination, human exposure, and significant public health problems. This project will map changing biosphere -animal-Pb interactions in the Peak District from the Neolithic (6000 BP) to the present day.

he PhD project will track changing sources and exposure levels of Pb in biota through time, investigating how this manifests from pre-mining background values through developing mining activities, to the present acknowledged health risks. Archaeological animal samples and modern tissues from existing local wildlife surveillance studies will be used to map exposure measurements.  Pb concentrations and isotope composition will be analysed and mixing models of ingested sources – geogenic vs anthropogenic pollutants – will be produced. This will map the potential Pb-related health risks to populations in areas of mining activity and legacy mines to the present day.

The studentship will be based at BGS, with supervision and training undertaken in partnership with University of Nottingham archaeologists and veterinary scientists.

The project would particularly suit candidates with a background in Geography, Earth Science or Archaeology.

Please forward any questions to Holly.Miller@nottingham.ac.uk.