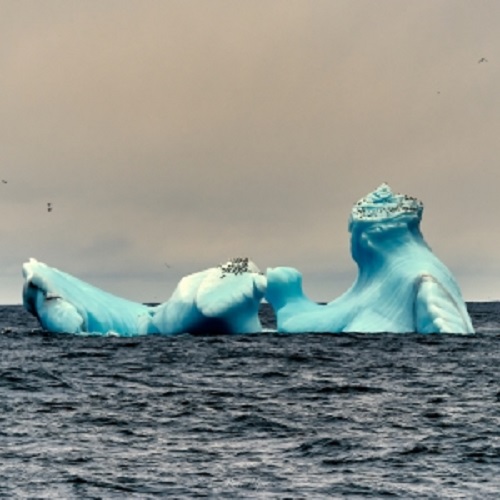 Jack Garnett describes the wonder of a 3-week scientific expedition to the Arctic collecting samples for his ‘ENVISION’ PhD research into the impact of human-made pollutants in this remote region.

I had tried to get fieldwork from the start of my PhD, but getting into the Arctic to collect samples is incredibly difficult, especially for a young scientist at the beginning of his career without many contacts. But I was extremely lucky. My supervisor knew a guy, who knew a guy, who offered me an opportunity to join him on an expedition he was leading. But then, less than a week before departure, it was cancelled due to a mechanical problem with the ship. My first and possibly last chance to go to see the Arctic for myself had suddenly disappeared into a giant chasm. Gone. I was gutted!

Then suddenly, I got another email from the same guy: “Jack, one empty spot showed up on the forthcoming KPH cruise 5-25 August. Interested?”. That was in 3 days. It was going to be a journey from hell. After 17 hours of travelling, through 4 airports in 3 different countries, I was there just in time.

My home for the next three weeks was a brand-new icebreaker, the ‘RV Kronprins Haakon’, one of the newest and most advanced research vessels in operation.

It is enormous, a thing of beauty and an engineering masterpiece. At 100m long, it is longer than the statue of liberty is tall, with 5 monster cranes for lifting heavy equipment, a massive A-frame at the stern (rear) for trawling samples from the bottom of the ocean and a huge golf ball-like object on the top deck for its global positioning system. I headed up the steep aluminium gangway and was greeted by one of the crew, handed my electronic key card and was directed to cabin number 456.

During our first evening onboard, the air was still, and the skies were clear. The sun never stooped behind the horizon. Layers of high mountains surrounded us and were lit up in a glorious blend of golden yellow and chocolate hues. Glaciers in all directions licked the water edges as we exited the fjord and steamed West of Svalbard into the Greenland Sea. 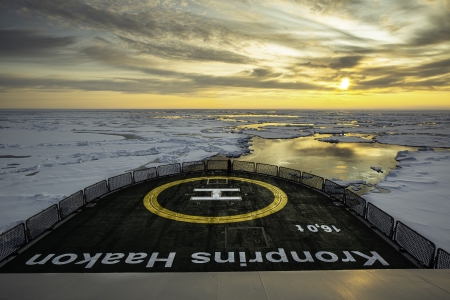 Photo taken from the deck of the ship looking out across the helipad of the RV Kronprins Haakon icebreaker as the ship forges a course through the ice. Though it doesn’t drop below the horizon in August, here the sun is giving the sky a yellow glow, which is reflected in sea in an opening in the ice just ahead of the bow of the vessel. © Andreas Wolden

Chemicals in the Arctic – why it matters

The expedition was part of the Nansen Legacy and Changing Arctic Ocean programme, international projects which aim to understand human-related impacts in the Arctic environment. Using the KPH, scientists hope to peel back the lid of the ocean surface to explore what lies beneath. The group of generous, amusing and motivated scientists came from many different countries with different areas of interest. One key focus is the presence of man-made chemicals in this remote environment. But why do chemical contaminants matter in such distant regions?

So called, Persistent Organic Pollutants (POPs) are a highly toxic class of chemicals that can accumulate in the tissues of animals and humans. They originate from chemicals used throughout agriculture and industry. Perfluorinated alkylated substances (‘PFASs’) for example are used extensively throughout the globe for making all sorts of well-known products. They include Teflon®, a product that is used to coat your non-stick frying pan and Scotchgard®, a spray-on waterproofing and stain repelling agent used on textiles.

PFASs are released into the environment through industrial effluent and as vapours emitted during industrial processes, so can travel long distances to remote locations via oceans and atmospheric currents. Once there, they have been found to accumulate in the tissues throughout the body and concentrate rapidly as they move up the marine food chain from tiny algae to the top predators like the polar bear. As many of these chemicals are toxic, they pose a risk to the marine ecosystem and to us.

Many foods we humans consume are tightly linked to this highly productive ocean and so it is imperative that we understand the processes which control the environmental distribution of contaminants and the effects that they have on the biology there but there is still a lot we don’t know about this.

I’m particularly interested in the sea ice, and the role of the brine it contains, which is where the micro-organisms at the bottom of the food change live. I want to find out what happens to different POPs within the sea ice, which ones get released and how quickly they disperse when the ice starts to melt. I’d carried out some lab-based experiments on ice which I had created myself to explore what might happen to some of the POPs: this was my chance to collect the real thing in the field.

I was sat in the observation room on deck 9 at 2am in the morning, alone, unable to pull myself away from my evening’s entertainment of looking out to sea in search of whales and other wildlife. Fulmars and the occasional Arctic skewer circled around the ship, waiting for their next free meal.

Then I saw it. My first iceberg. I grabbed the binoculars and ran out onto the deck dressed only in my shorts and t-shirt. I could only see the surface 10m, which was coloured the most magnificent spectrum of blues. Seabirds were peppered across its surface, huddled in groups, drifting on the Barents Sea. 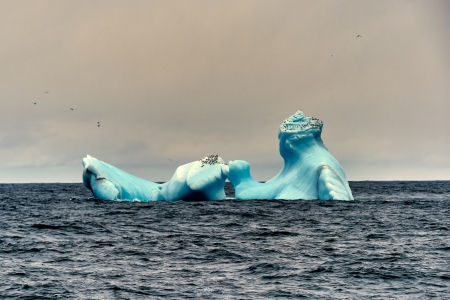 A curving bright blue iceberg sits in the dark sea beneath a moody sky. Seabirds circle the berg and sit on its three peaks. © Robin Hjertenes

It was around 5pm and I was in the observatory (Deck 9) with other scientists peacefully enjoying our downtime: reading, knitting, chatting or looking for signs of life outside.

We had recently reached the ice edge and the captain steered us gracefully through the ribbons of open water that were hiding amongst the vast ice fields. It was all calm, until one of the other scientists in the room announced, “I think I saw a polar bear”.

Everyone jumped up in excitement, frantically searching for binoculars. A yellow speck of fur, with three single black pixels for a nose and two eyes, sat in the dazzling white landscape by the water, waiting for its next meal. It was the first of many bear sightings. 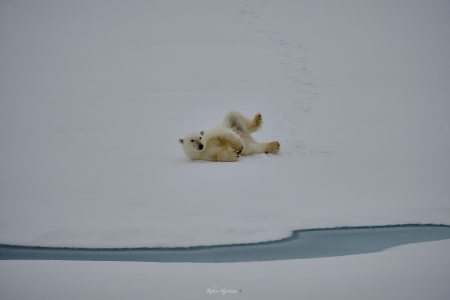 With a trail of footprints behind it, a polar bear rolls in the snow. It appears to be cream coloured in comparison to the perfect white snow. © Robin Hjertenes

The ship operated 24/7. No matter what time it was, there would be some sample being taken, some instrument being lowered into the water, people busy at work in some of the 11 laboratories scattered around the deck. My field work needed the thick ice which would come later in the expedition, so I spent much of my time in the first two weeks observing and assisting the other scientists onboard. It was fascinating.

The sea looked bleak and lifeless on the surface but underneath it was teaming with it. The ship’s crew lowered nets of different sizes to catch everything from tiny rose-pink coloured plankton to small caplin, 1-metre long Atlantic cod and thousands of juicy shrimps. Any surplus edible fish were directed to the kitchen for the chef to cook. A metal contraption designed to scoop samples from the ocean floor was lowered up to 3000 metres bringing up. all sorts of weird creatures: brittle sea stars; stomach-turning sea cucumbers; pasty-looking sea angels and much more.

Breaking through the ice

We journeyed North, ploughing through vast ice fields: cracks rushed open like lightning bolts as the ship ripped into the metre-thick ice, huge shards were thrown around. As we headed further, the ship steered into a large ice floe and we began to gently creep forward. We had reached our first ice-sampling station

Everyone headed to the wardrobe to get suited and booted – Arctic style – in bright yellow and orange suits with a belt containing ice spikes to claw your way out of the freezing water if you fell through the ice. Thick hats, warm gloves, and sunglasses to protect against the cold Arctic air and the glaring sunlight bouncing off the snow. The suits were warm but cumbersome and everyone waited tetchily on deck until we were given the thumbs-up by the folk on the bridge (Deck 8). I thought to myself, ‘I’m about to set foot on a piece of ice that had never been touched by human’. I felt like an astronaut going into battle.

On the ice at last

I had butterflies in my stomach, excited, but nervous. I’d never worked on the ice before. I had carefully planned for this moment for months. I loaded up my pulk (sled) with my equipment and marched in line towards the coring site about a football field away from the ship. A perimeter of polar bear guards surrounded the site, rifles in-hand, attentively scanning the alien landscape through binoculars for any signs of life. I placed my things next to my assigned spot and began to unpack them.

We only had a limited time to collect our samples. There was little time for mistakes. I scraped away the surface snow layer. It was surprisingly thin with far less snow than I wanted. I had to improvise. I got the corer and began to slowly drill down into the ice. I was shocked how easy the corer went into the ice and just how mushy the ice was. We worked in teams; one person taking the cores, another cutting it into sections, and a third packing the sections away to take back to the ship, where they would be melted for initial analysis in the on-board labs, and then samples stored to bring home for more sophisticated analysis.

A stop at a second sampling site during a snow storm, yielded thicker ice and more samples. By the time we were on our return journey, I had collected 40 ice cores as well as samples of seawater from below the ice – more than I had ever hoped for. Now the exciting and nerve racking wait to analyse my samples in detail. 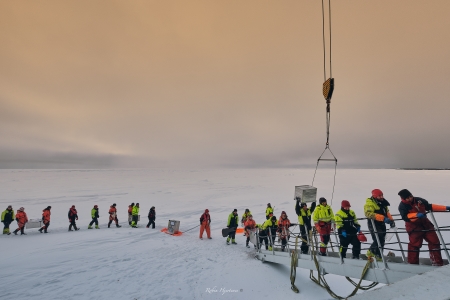 21 scientists mainly wearing high visibility yellow and orange arctic working gear and carrying large boxes of samples and equipment up a metal gangplank as they re-board their ship from the ice. © Robin Hjertenes

Doing a PhD, it’s sometimes easy to get lost in your own little ‘bubble’ and lose sight of the bigger picture. The expedition gave me a much deeper appreciation for the beauty and changeability of the Arctic environment, and to contextualise my research. It also gave me the incredible opportunity to work with other scientists, see the sorts of work that they do and think creatively about further work. Being part of this cruise opened my eyes