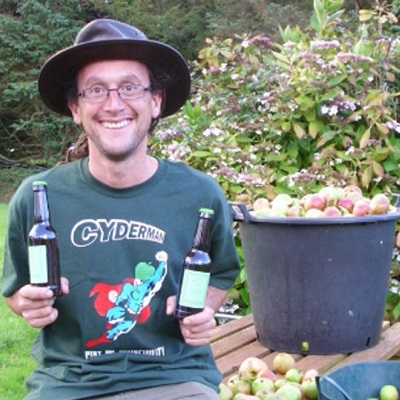 Since moving to North Wales to start a forestry degree at Bangor University, I noticed many productive apples trees were not being picked and that the fruit was going to waste. As I was brought up among Kent’s productive apple orchards, I have always had a passion for traditional cider production and home brewing, so I decided to build up a network of fruit-tree owners who were not using their fruit. My partner and myself, then started producing small-scale artisan cider from apples collected locally from gardens and small farms, ensuring that these apples did not go to waste. Once we were producing more cider than we could feasibly drink ourselves, the next obvious step was to start selling this delicious and sustainable drink to the public. Out of this was born an idea, which became Dwynwen Cider, named after Anglesey’s local legend Santes Dwynwen, the Welsh patron saint of lovers.

In the hopes of encouraging others to do the same, I started demonstrating traditional cider-making techniques at a range of events locally within North Wales, including the Anglesey Woodland Festival, Treborth Tree Fair and the Conwy Food Feast. I have developed close links with local apple tree expert Ian Sturrock, who has rediscovered several extremely rare apple trees specifically suited to the harsh and windy environmental conditions of Anglesey. As nationally and locally traditional orchards have been in decline, it is hoped that an increase in interest in apples and orchards could help to preserve and improve this important and increasingly rare habitat and its associated biodiversity.

This year we have begun working closely with the Welsh Cider and Perry Society (http://www.welshcider.co.uk/) and their Heritage Orchards project, by training and mentoring local community orchard projects, to enable them to produce their own cider from previously wasted fruit. Later this year we will be filmed helping Conwy Orchard Project to blend and bottle their cider for a programme to be televised on S4C. We have also been involved in community apple pressing events at Coed Llwynnon and Llanberis Community Orchard. The cider business has grown year on year and last autumn we collected over 2 tons of unwanted fruit, which we pressed and fermented, into approximately 800 litres of cider. We fermented the apples as three seasonal batches, the early apples, the mid-season apples and the late apples, fermented separately. In addition to this we have produced small experimental batches of Perry, bourbon oak-aged cider and melomel (cider made with fermented honey instead of sugar), which if successful we hope to add to the range of ciders we sell.

The long-term aim is to establish a business, which owns a fruit processing, and pressing facility on Anglesey where anyone with spare apples can take them to be processed and preserved, and the juice then either fermented or pasteurised as apple juice. Apple-tree owners could also choose from a number of processing and trading options. The innovation is not in the product, but the change in the way that the supply chain works, in order to increase viability of small orchards and also to generally reduce the amount of food waste on the island. I am also interested in the various ways which small, medium and large cider producers in Herefordshire have developed cider-based tourist attractions, as I believe that this is something we could replicate on the Isle of Anglesey. I have received support for this business from a mentoring scheme offered through B-Enterprising at Bangor University.