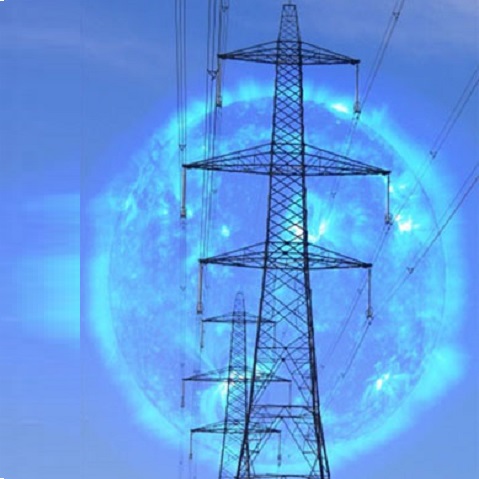 Variability in the magnetic field generated by dynamic processes outside the solid Earth can occur over a variety of timescales. As well as limiting the accuracy of geomagnetic field models, this external magnetic field can pose a natural hazard for large-scale electrically conducting systems such as power grids, oil pipelines, and railway signals.

The risk to electrical infrastructure posed by solar storms, so-called “space weather”, was formally recognised as a significant UK risk by its incorporation to our National Risk Register in 2012. Rapidly changing magnetic fields at ground-level, imposed from space, can induce electric currents (geomagnetically induced currents or GICs) into power grids that can disrupt the operation of key grid components such as transformers. This disruption can cause parts of the grid to shutdown leading to widespread loss of power for many hours and, in worst cases, damage to multiple transformers, which could lead to long power outages in affected areas.

This project aims to map the distribution of naturally-occurring magnetic field fluctuations due to space weather that drive GICs and understand the relative importance of solar drivers. Key among these will be the strength and orientation of the solar magnetic field that bathes the Earth and solar radiation output.

The student will focus on data analysis, exploiting a database of magnetic field measurements from almost 300 stations around the globe and spanning almost two decades as well as measurements of the Earth’s magnetic field taken by satellites in Earth orbit (such as by the ESA Swarm mission) to (i) determine the distribution of magnetic field fluctuations associated with external current systems under different solar driving conditions, and (ii) investigate the how these ground-level fluctuations correspond to external currents observed in low-Earth orbit by satellite instruments.

Eligibility: Applicants should hold a minimum of a UK MPhys Degree at 2:1 level or equivalent in subjects such as Physics or geophysics.