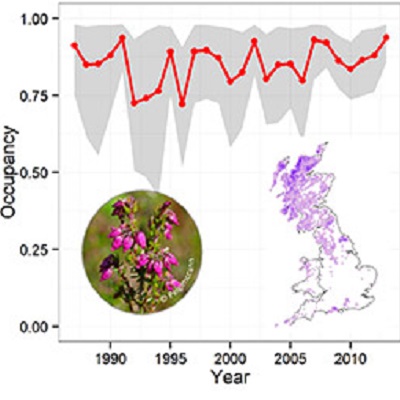 The failure of the Rio Convention to halt the loss of global biodiversity resulted in the new Aichi Target: “By 2050, biodiversity is valued, conserved, restored and wisely used, maintaining ecosystem services, sustaining a healthy planet and delivering benefits essential for all people”.

However, species vary in response to environmental change, with some human commensal species increasing in range and local abundance, while habitat specialists have decreased. Considerable uncertainties remain about how these dynamics have driven temporal and spatial trends in valued traits (e.g. do the increasing species tend to provide the most ecosystem services?) and to what extent significant change is conveyed by taxonomic, phylogenetic or trait diversity.

Moreover, the spatial scale of the analysis is likely to be key to detecting evidence of such patterns, i.e. do changes at the fine-scale reflect those at large-scale, are larger-scale studies failing to detect crucial signals of biodiversity loss? While evidence has accumulated for the role of biodiversity per se in providing insurance for future ecosystem function, some have questioned whether recent local diversity changes have in reality resulted in predicted declines in ecosystem function.

This project will bring clarity to these questions by addressing the following questions: – Which trait characteristics define a ‘winning’ and ‘losing’ plant species in Britain in the last 50 years, and are the trait signals constant across multiple spatial scales? – Are patterns of homogenisation in the British flora consistent between scales? – Can we detect changes in functional, trait and phylogenetic diversity, and what are the likely implications of these changes in securing future ecosystem service supply? – Do traditional analyses of species diversity fail to detect biotic homogenisation and linkage between changes in functionally important traits and global change drivers?

This project will suit a numerate student that has an interest in addressing ecological and conservation questions through macroecological techniques. Training will be provided in modelling, statistics, field ecology and botany. Applicants should hold a minimum of a UK Honours Degree at 2:1 level or equivalent in subjects such as Natural Sciences, Ecology or Environmental Sciences.