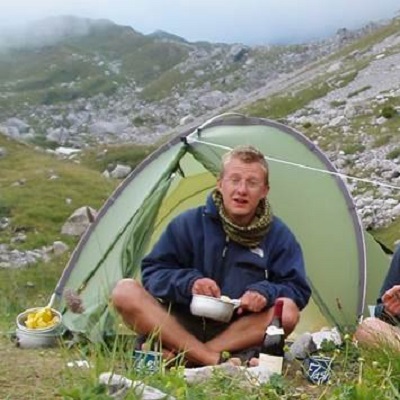 Prior to university I spent time travelling with a few years in the army after which I completed a BSc in geology at the University of Liverpool. During my time at Liverpool I completed a dissertation on the structural and stratigraphic evolution of a region in the Swiss Alps, the project allowed me to pursue my interests in the geology of mountains and orogenic evolution. On completion of my BSc I undertook a MSc in Mining Geology at the Camborne School of Mines, for my dissertation and project I travelled to El Salvador and studied a gold & silver epithermal gold deposit. The MSc lead me on to 6 years working as a geologist specializing mainly in underground gold mining. During this time I mainly worked in Australia and Saudi Arabia and also visited Armenia and a brief spell in South Africa. It was good, I enjoyed the work. I returned to studies and recently completed a MSc in Structural Geology with Geophysics, I completed a 3 month project looking at the evolution of a rift basin off the Irish coast and the hydrocarbon prospectivity. A highlight of the MSc at Leeds for me was a field trip to the Pyrenees which were amazing. The Phd at Lancaster allows me to pursue my interests in the geology, tectonics and the evolution of mountain systems in an amazing region of the world. In my free time I enjoy running and hiking in the Lakes.

My project will be based at LEC, Lancaster University with time spent away conducting fieldwork in western China, the Pamirs and Tarim Basin. The project will be researching crustal deformation processes and the degree of their proposed coupling with climate, using the type example of India-Asia collision and Himalayan-Tibet evolution. The timing and mechanism of Tibetan plateau uplift and associated regional climate change is much debated and poorly constrained.

The project will use the Cenozoic sedimentary record of material eroded from the Tibetan plateau and deposited in the adjacent Tarim basin to assess the timing of evolution of the northern margin of the Tibet plateau, and document the record of regional climate change. The project, which will involve will involve:

1. Sedimentological field work in the Tarim Basin including facies analysis and sedimentary logging.

2. A detrital geochronological, thermochronological and isotopic provenance study, involving radiogenic isotope analyses at NERC’s Isotope Geoscience Lab at BGS Keyworth (NIGL), in order to constrain the plateau’s geological evolution from the detrital record of material eroded from it.

3. A stable isotope study, involving analyses at LEC’s stable isotope lab, to assess regional climate variability from a study of the pedogenic carbonate and organic carbon preserved in the sedimentary record.