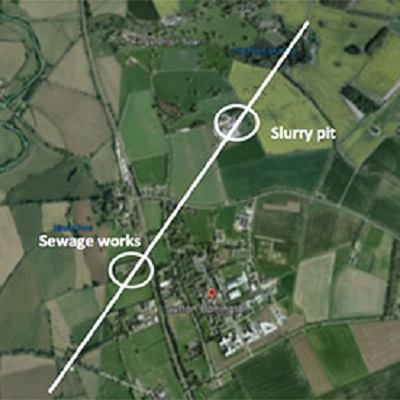 Antimicrobial resistance (AMR) is a major global challenge. It is estimated that globally 700,000 human deaths per year are due to AMR, predicted to rise to 10 million by 2050. While much research is in medical/agricultural contexts, the spread of AMR in the environment is often neglected. Antimicrobials and antimicrobial resistant genes (ARGs) and organisms have sources in agriculture and wastewater treatment plants (WWTP), which are spread on land through slurry, manures or sewage sludge, or released directly into rivers. Soil and water polluted by antimicrobials and resistant bacteria can impact crops, animals and humans. Thus, AMR presents both an environmental and human health hazard.

Our vision is to develop mathematical models that can predict AMR spread in the environment. Such modelling will require numerous factors, including: prevalence of ARGs and the relative role of different AMR sources, pathways, drivers and receptors. These models would be used to inform policy on the priorities for controlling AMR in agriculture and the wider natural environment and on the most appropriate specific actions following an outbreak of an AMR pathogen. They will also help prioritise AMR surveillance. Most mathematical modelling for the environmental spread of AMR operates locally, e.g. in a slurry tank, field soil or a WWTP, or a smaller still, e.g. a biofilm. A challenge is to develop predictive models at much larger environmental scales.

This PhD project will begin to address this challenge, by following four novel modelling approaches: incorporation of the heterogeneity of AMR agents; using a combination of deterministic and stochastic models to account for both microscopic and population level scales; up-scaling the current approaches to an environmental scale by using methods developed for geospatial modelling of pollutants; and calibrating the models with geospatially explicit environmental AMR surveillance data from our projects and those of our collaborators.

Applicants should hold a a minimum of a UK Honours Degree at 2:1 level or equivalent in any relevant scientific discipline with considerable quantitative component, e.g. mathematics, physics, computer science or engineering. They must be able to evidence excellent mathematical and computer programming skills, and a willingness to work across multi-disciplinary boundaries, including physical geography and microbiology.