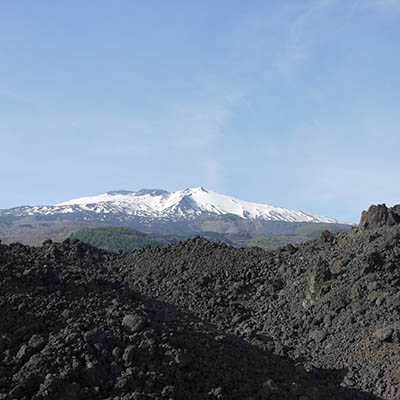 The emplacement (flow and cooling) of low silica, low viscosity basaltic lavas is relatively well understood due to the high frequency with which they erupt at locations such as Mt Etna, Iceland and Hawaii. In contrast the emplacement of high silica, high viscosity rhyolite lava is relatively poorly understood due to the infrequent (and normally explosive) eruptions. The 2011 eruption of Cordón Caulle provided some of the first detailed observations of the emplacement of a rhyolite lava flow with initial observations suggesting it is very similar to long-lived basaltic lavas, with an unusual tendency to “breakout” from the hardened flow front and continue flowing. This project ultimately aims to derive a universal model for how lava is emplaced, allowing better hazard prediction of rhyolite lava flows and a better understanding of volcanoes as a hazard.

Research will involve fieldwork at Cordón Caulle in Chile and Mt Etna in Italy: in Chile samples of cooled lava were gathered and detailed field observations and measurements were made. A shorter field season on Mt Etna also provided further field observations and key samples. Analysis will involve micro-observations and Scanning Electron Microscope work of thin cut samples to identify properties of the lava, like its crystalline microstructure and air bubble textures. In addition, photographic techniques will be employed such as analysing satellite imagery of the lava flows.

“It is clear that our current understanding of the emplacement of rhyolite lava flows is in need of further work and re-evaluation. Being able to move our understanding of lava emplacement forward is a fantastic opportunity. More and more people are living closer to active volcanoes, hence it is vital that we fully understand the hazards presented by volcanic eruptions.”