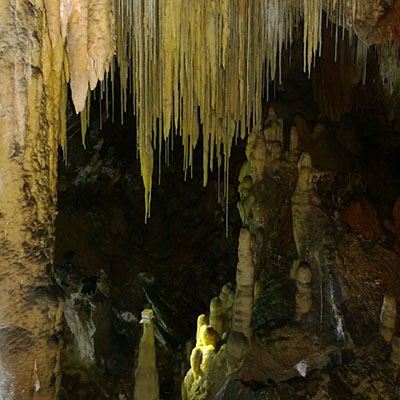 The disappearance of the Neanderthals, a hominin species similar to ourselves, is a hotly debated topic, with some scientists suggesting that the cause was the arrival of anatomically modern humans whilst others say it was related to climate change. Although climate variations are known to have occurred, there is currently minimal evidence for these climate changes on the Iberian Peninsula, Spain. Cave deposits called speleothems (stalagmites, stalactites etc.) have the potential to provide a continuous record of climate change over a long period of time through analysis of their geochemistry and thus inform if climate was a major contributor towards the Neanderthal demise.

Laura will be using samples of speleothems from Matienzo in Spain, to reconstruct the climate in northern Spain during the period of the Neanderthal extinction. Conditions within the cave from which the speleothems will be collected are being monitored to determine the link between the climate outside and the effect within the cave. The project aims to produce a high-resolution record of past climate and environmental change between 50,000 – 30,000 years ago; this will be the first such record in the northern Spain region. The age of the speleothem samples will be determined using uranium series dating, then further analysis will be carried out using oxygen isotope, carbon isotope and trace element analyses. This will allow a detailed indication of the past climate to be established and tied in to the Neanderthal timeline.

“Previously, my studies have focussed on palaeoclimate reconstruction during the Quaternary (past 2.6Ma) period. I feel like it is of critical importance to understand how climate has changed in the past in order to understand the impacts of future climate changes. Personally, I am fascinated by the human evolution story and find it interesting to understand how a species very similar to us, the Neanderthals, simply disappeared from the planet. Therefore my project combines two of my key research interests, reconstructing past climates and human evolution.”