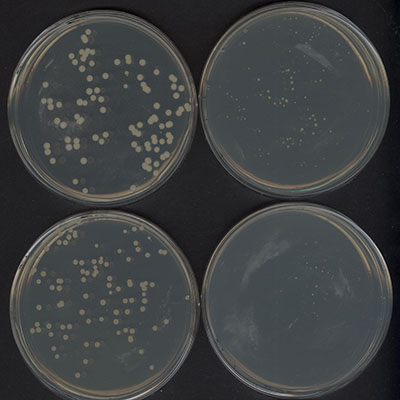 Genetic variation within populations helps a microbial species to survive environmental stresses, as variants may be better adapted to the alternative conditions. Experiments with single-cell microorganisms have shown that individual cells within a population also have markedly different abilities to survive environmental stresses, despite being genetically-uniform. It has been speculated that this non-genotypic heterogeneity (NGH) is important for the survival in the wild, but studies have focused almost exclusively on lab models. This project aims to test the hypothesis that NGH evolves in wild microbial populations as a general mechanism for countering environmental hazards. If NGH is relevant in the wild, in relation to adaptation in response to stress it would be possible to use it as a marker for factors like pollution, or for targeting antibiotic resistance.

This project is developing a new method of measuring NGH, involving measurements by software of colony area variation in genetically identical cells, in contrast to existing methods using growth rates or kill curve gradients, with this method characterising the variation of new wild yeast isolates. The lab findings will assess whether NGH is a marker for environmental stress. 3D printers and time-lapse microscopes will be used to attempt printing of single cells and visualising their growth with the printing may also be applied for creating devices for looking at other single-cell characteristics.

“I find small-scale mechanics of populations interesting, so enjoy working on single cells and their role as part of a colonies survival.”